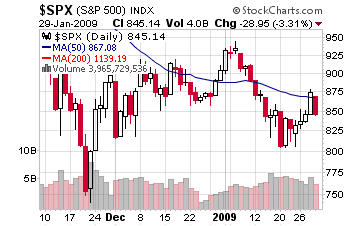 While Thursday’s sell-off was on lighter volume than yesterday’s massive upside move, it showed the market’s reluctance to cross the all important 50-day moving average.

Nevermind all the political bantering and weak earnings forecasts out there.

If the market’s ready to bottom it will come when things are ugly. That’s the way it’s always worked.

So just focus on price and volume.

For a cleaner look at price-action take in the point and figure chart of the S&P 500 below. They filter random price moves by taking out the time element in the market to give a sturdier take on how price shifts. 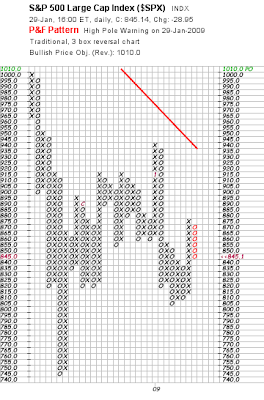 It’s a clear picture of the dominant downtrend we’re in and the work needed to buck it to the long side. 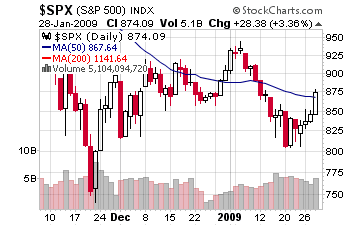 The market was loud and clear Wednesday as the S&P shot up more than 3% on strong volume.

While it appears to be the type of strong institutional buying we’ve been waiting for, we want to see it convincingly hold above its 50-day moving average.

Beyond that we want to see some type of Leadership asset itself. 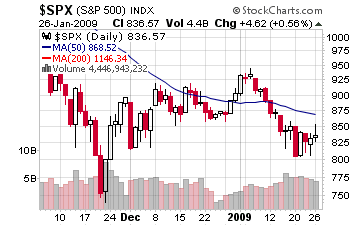 This is where we try not to think.

Price-action and volume are telling us very little right now.

Monday’s modest rally attempt doesn’t really add up to much as it comes well shy of its 50-day moving average.

Any retest of lows would simply be anyone’s guess.

So as intermediate-term breakout buyers we stay patient for a clearer signal.

Wow! Thursday’s high-buy-volume reversal from its lows bodes well for the Bulls’ cause.

Especially when headlines were once again focused on the dismal situation with the banks.

When Accumulation is followed by Distribution it tells us that Bears are stronger – for the time being at least.

Our analysis is an ongoing take on what the market is telling us. Just as price action can change direction on a dime, so can we.

Most importantly, the weekly take we have on things has kept us out of trouble for some time now.

It is simply not the time to buy Growth Stocks.

While more aggressive short setups have worked out, they’re too flighty to recommend on a week by week basis in a market that has been anything but stable.

That’s Accumulation, or institutional grade buying, on the S&P 500 and Nasdaq Comp. for Tuesday.

But it was also Distribution, or institutional grade selling, for the Dow 30.

General volume indications over the past few weeks have clearly favored the Bulls.

That doesn’t mean we’re loading the boat with buys. It simply means that odds are currently favoring the upside for week to week trading.

But all it takes is more heavy selling to erase that, which in today’s environment isn’t too hard to imagine.

We’re also awaiting Leadership in advancing stocks to give us confidence in a rally.

just passing this on…

from Forbes.com: Digital Rules By Rich Karlgaard by forbes blogger

On Monday and Tuesday, I did one of those brutal out-and-backs to New York to give a lunch speech at Needham & Co.’s annual growth conference. Attendees were entrepreneurs, CEOs, venture capitalists, private equity managers and the like. Some 1,200 people jammed the Palace Hotel.

My speech was about the 1970s. Mark Twain says history doesn’t repeat itself, but it does rhyme, and I hear echoes of the 1970s. Then, stocks fell 45% from tip to toe from early 1973 to late 1974. The crash was foreshadowed by spikes in oil and gas prices. Easy credit and the Nifty Fifty bounce in big-cap stocks in 1972 had created scores of bloated conglomerates. Political uncertainty and fear were off the charts, as Vice President Spiro Agnew resigned in November 1973 and Nixon in August 1974, while the Vietnam War was heading for its final, ugly conclusion in April 1975.

The 1970s turned about to be a good decade for start-ups, which had learned to use new technology and also survive lean times. FedEx, Southwest Airlines, Microsoft, Apple, Genentech, Oracle and others were born in the 1970s. That will happen again. Growth companies that can exploit cheap technology and learn to stay alive during periods of deflation, inflation and delusion will lead America out of today’s muck.

One of the few good things about a San Francisco to New York quick round trip is the time it affords one to read. I spent both flights plowing through The Snowball, Alice Schroeder’s definitive biography of Warren Buffett. The chief criticism of The Snowball is its length–almost 1,000 pages–but I liked its rich detail. I especially liked how Schroeder got down the tenor of the times: Buffett’s youth in the 1930s and 1940s, life in Omaha in the 1950s and early 1960s, and the social turbulence and market turmoil of the late 1960s.

About the 1970s, Schroeder writes:

By October 1975, [Berkshire Hathaway] had been cut in half after trading at $93 just two years before. … The world continued to end. … The U.S. economy was by then in so much trouble that New York City was almost bankrupt; the country was in a mood of such profound pessimism that it affected people’s judgment.

The pessimism, then as now, was unevenly distributed. The year (1975) that gave us the fall of Saigon and a collapse in confidence also gave us the birth of Microsoft. The next year we elected one of the feeblest men to ever hold the office of presidency, a man, Alice Schroeder writes, “who wore Mister Rogers sweaters to promote energy conservation.” But we also got the birth of Apple and Genentech.

Berkshire Hathaway, as you might have heard, recovered too.

Post your comments below. How does the pessimism of 2009 rank with other sour years: 2001, 1990, 1982, 1973-75? Something else to think about: The most dangerous words in investing are said to be “this time it’s different.” This is usually said as a warning against excessive optimism during bull markets. Doesn’t it also apply to excessive pessimism?

First week into the New Year and the Bull’s take it up a notch.

With price action above the 50-day MA on the S&P things are pointed up.

Bigger question remains: How long will it last?

We want to see Leadership set in. This will be better discerned in our weekly analysis…